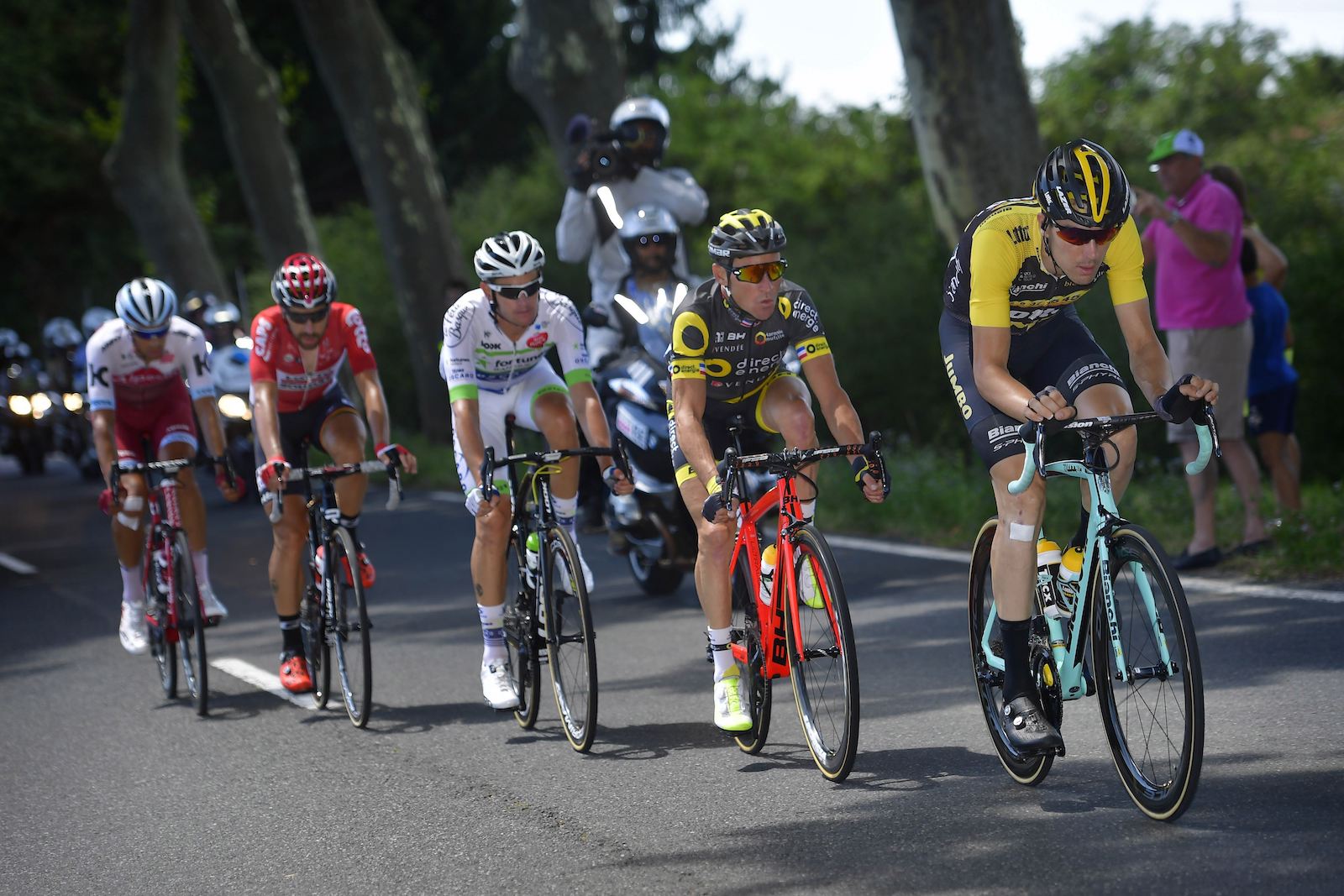 177 riders started stage 14 in Blagnac. Thomas Voeckler (Direct Energie) attacked from the gun. He was quickly joined by Timo Roosen (LottoNL-Jumbo), Thomas De Gendt (Lotto-Soudal) and Maxime Bouet (Fortuneo-Oscaro) while Reto Hollenstein (Katusha-Alpecin) jumped across on his own and reinforced the leading group at km 14 mark.

Their maximum advantage was three minutes at km 25 as teams BMC and Sunweb of hot favourites Greg Van Avermaet and Michael Matthews prepared for an uphill finish from very far out. With the help of Jani Brajkovic (Bahrain-Merida), they maintained the time difference for two minutes for most of the stage. De Gendt won the intermediate sprint and crested the two categorized climbs in first position ahead of Voeckler.

The leading quintet split in the côte de Contrès with Bouet cracking 1st at the 38km to go. De Gendt and Voeckler forged on while their former breakaway companions were brought back by the peloton. With 32km to go, De Gendt rode Voeckler off. The Lotto-Soudal rider stayed one minute ahead with 20km to go. He was reeled in with 12km to go after 170km in the lead.

Maurits Lammertink (Katusha-Alpecin) counter attacked straight away along with, Damiano Caruso (BMC), Nikias Arndt (Sunweb) and Pierre-Luc Périchon (Fortuneo-Oscaro) who accompanied the Dutchman off the front but it was all together once again with 4km to go.

After Belgian champion Oliver Naesen (AG2R-La Mondiale) disturbed the lead out trains, Philippe Gilbert (Quick-Step Floors) launched the uphill sprint in Rodez from far out but it was a duel at the top of the climb between the two riders everyone expected. Matthews proved to be a bit stronger than Van Avermaet. The Australian claimed his second stage win at the Tour de France one year after he did it in Revel. Splits in the peloton put Chris Froome back in the leaders yellow jersey with an advantage of 19 seconds over Fabio Aru and 23 over Romain Bardet.