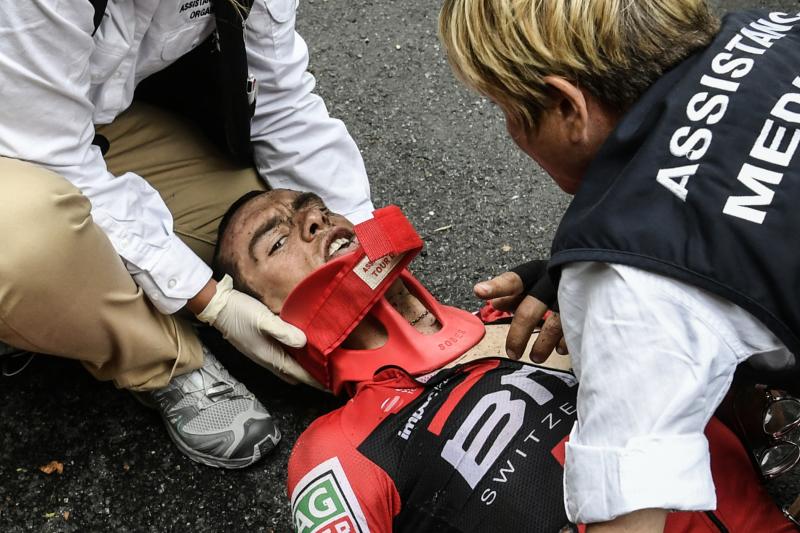 Tom Dumoulin (Giant-Alpecin) triumphantly crossed the finish line alone atop the hors categorie Andorra Arcalis climb in a pelting hail storm Sunday to win Stage 9 of the Tour de France. The climb to the Andorra ski resort did not disappoint in creating an action-packed finale among the general classification contenders as well.

It was the first Tour stage win for the talented Dutch rider, who now has won a stage at all three Grand Tours at the age of 25. He is the 11th active rider to achieve such a feat.

“This is a dream come true,” Dumoulin said. “I’m so tired that I can’t even speak. It’s been an incredible day. I’ve won the queen stage. It’s special. I’ve showed that I’m not only a time trial specialist. I can do more. I’m so happy.”

The main event of the stage occurred about 100km from the finish, as Alberto Contador abandoned the race. This is only his second abandonment in 15 Grand Tour participations.

“I couldn’t continue,” Contador said. “This morning I was feverish after the crash in the first day, I really didn’t feel well and it pushed me to make this decision. I must have medical checks to see what’s wrong to try and recuperate for the rest of the season.”

A devastating crash during Stage 9 at the Tour de France on Sunday caused extensive injuries to top contender Richie Porte.

According to Sam Edmund of News Corp Australia, via the Herald Sun, the Australian lost control on the descent down Mont du Chat. He was brought to Centre Hospitalier Metropole Savoie in Chambery, where it was discovered Porte fractured both his pelvis and collarbone.

“His condition was stable from the beginning, he was responsive and he remembered everything that happened before and after the crash,” BMC medical officer Max Testa said. “…If everything goes to plan, Richie could be back on the bike at the beginning of August and slowly build his fitness up from there.”

Porte finished in fifth place last season and was considered to be one of the top challengers to Chris Froome, who currently leads the race and has won each of the last two years.

The 32-year-old was in fifth place after Stage 8 of this year’s contest, but the accident will force him out of the race.