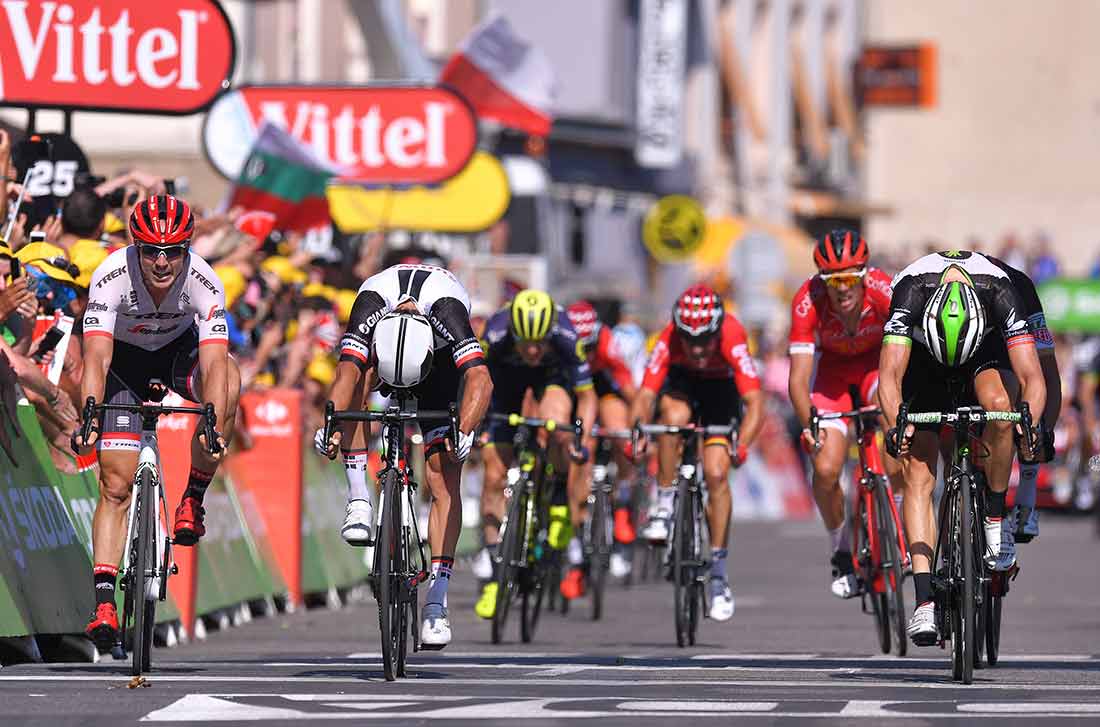 174 riders started stage 16 in Le Puy-en-Velay. Philippe Gilbert (Quick-Step Floors) was a non-starter due to illness. Sylvain Chavanel (Direct Energie), Thomas Degand (Wanty-Groupe Gobert) and Thomas De Gendt (Lotto-Soudal) were the most active riders in the first hour of racing. At the côte de Boussoulet (km 20.5) they were in the lead with South African Daryl Impey (Orica-Scott) and Nicolas Edet (Cofidis). All skirmishes made the race too hard for Marcel Kittel (Quick-Step Floors) as well as many other riders, so Sunweb put the hammer down. Chavanel was the last breakaway rider to be brought back at km 44.5 km mark.

As a long downhill was following the col de Rouvey with 100km to go, Nacer Bouhanni (Cofidis) didn’t give up. He decided to attack from the green jersey group to bridge a gap of two minutes to the yellow jersey group led by Sunweb. He firstly did it in the wheel of his team-mate Julien Simon. He was later drafted successively by Nicolas Edet and Cyril Lemoine who waited for him. He was always accompanied by Nils Politt (Katusha-Alpecin) who had no interest to help him come across to the peloton other than to become one more rival to Alexander Kristoff. It took Bouhanni 50 minutes of chasing to make it back to the pack with 56km to go.

Crosswinds caused some tension in the peloton in the run-in to Romans-sur-Isère in the Rhône valley. GC riders started jostling for positions with 20km to go. It reduced the front group to 28 riders. Among the top ranked riders overall, Dan Martin (Quick-Step Floors), Alberto Contador (Trek-Segafredo) and Louis Meintjes (UAE Team Emirates) were missing. With 2km to go, Daniele Bennati (Movistar) tried to anticipate the sprint but he had to surrender 600 meters before the line. In a tight finish, Michael Matthews (Sunweb) outsprinted John Degenkolb and Edvald Boasson Hagen (Dimension Data) who missed out for the second time by very little. Chris Froome (Sky) retains the lead while Martin dropped from fifth to seventh overall after losing a minute to the lead group.