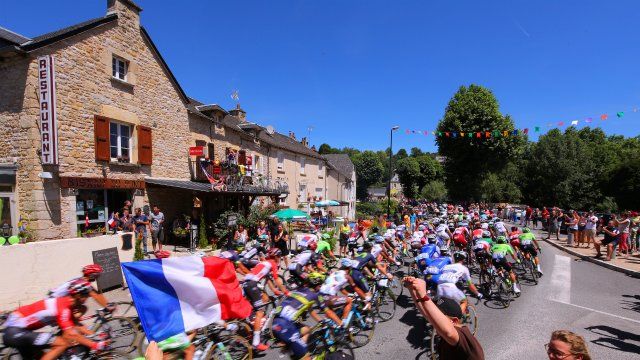 176 riders started stage 15 in Laissac-Sévérac L’Eglise as Tim Wellens (Lotto-Soudal) called it a day on this year’s Tour as he was suffering from severe allergies.

Barguil led all the way up the first category 1 climb of the day to score ten more points in the King of the Mountains competition.

The 28 leaders had a maximum advantage of 7m15 over the main peloton but the powerful Tony Martin would try his luck in a solo move 66km away from the finish on the ascent of the col de Peyra Taillade.

Chris Froome had a mechanical as Team AG2R were on the attack but had his most trusted lieutenant, Michal Kwiatkowski on hand to give him his back wheel. The race leader eventually made it back across to the Aru-Bardet group led by AG2R-La Mondiale but after a very demanding effort. Meanwhile, 3km before the summit, Barguil brought Martin back and continued to claim ten more KOM points at the top.

A group of nine riders was formed with 30km to go but without cohesion, Mollema would take a chance to ride away solo. He would be chased by Ulissi, Barguil, Gallopin and Roglic but managed to stay nineteen seconds clear of them all to win at the finish in Le Puy-en-Velay.

The race remained eventful till the end in the group of the favorites, as Adam Yates (Orica-Scott) and Louis Meintjes (UAE) attacked each other for the white jersey and Dan Martin (Quick-Step Floors) took advantage of the impossibility for Froome to ride after everyone. The main loser of the day among the big names was Nairo Quintana (Movistar) who completed the stage several minutes adrift after blowing up to col de Peyra Taillade that certainly added to the great spectacle of stage 16 ahead of a well deserved rest day