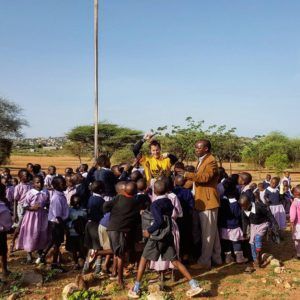 They really wanted the books! | At one my village stops on my way to Namanga on the Tanzania border, I met Daniel who was very interested in my journey, it turned out he was the Principal of the local primary school in Namanga on the Kenyan side and he invited me to chat to the school the next morning, before I crossed the border. So early the next morning I found myself on my bike getting lost on the outskirts of Namanga. 200 shillings later and a local motorbike taxi showed me the way. I think Daniel wasn’t entirely sure I would pitch, but he proudly showed me around the school, I spoke at their morning assembly and I was able to hand over a couple of small children’s books courtesy of #bookdash for their small library ?? It turned out to be a long day, school visit, border crossing and 120km hilly riding to Arusha, but a memorable one ?