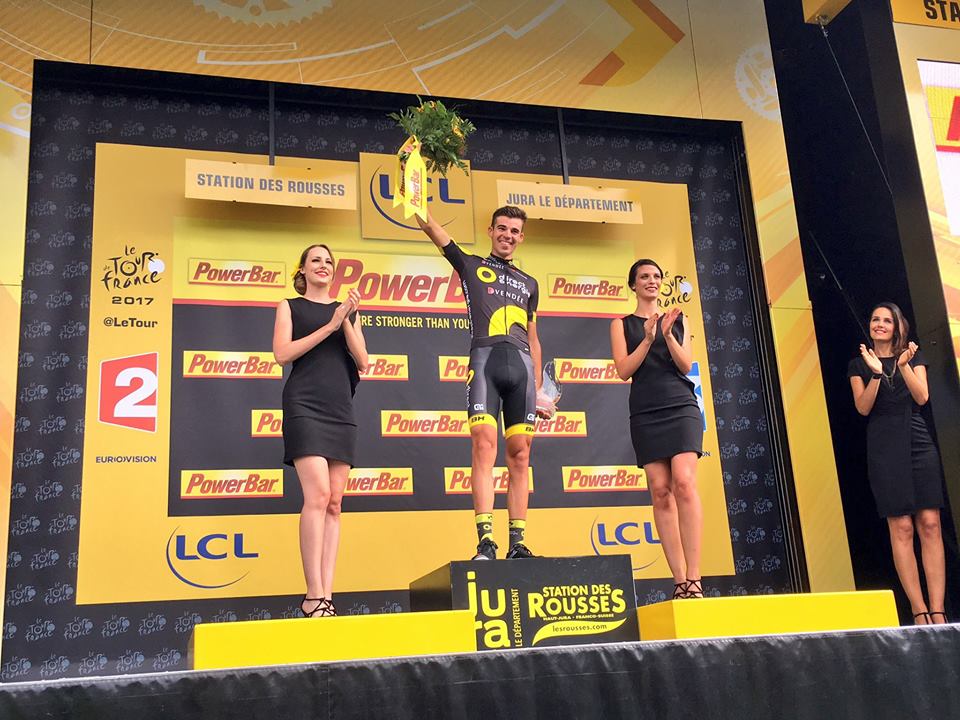 After winning three stage races at the beginning of the year, Frenchman Lilian Calmejane claimed the eighth stage of the Tour de France, while Team Sky’s Chris Froome retained the yellow jersey.

The general classification race remained as it was, with Froome ahead of Geraint Thomas and Fabio Aru, but Calmejane claimed the King of the Mountains jersey after an attack-filled stage.

The peloton was stretched early on by a series of attacks, but only three managed to escape, with Greg Van Avermaet (BMC), Alexey Lutsenko (Astana) and Sylvain Chavanel (Direct Energie) gaining a lead of just 34 seconds.

The first ascent of the day saw those three riders hauled back, but at the rear, Arnaud Démare, who was the first Frenchman to win a stage this year, was dropped, as an incredibly fast stage continued.

Quickstep took to the front with the stage nearing the intermediate sprint, where Andre Greipel took the points ahead of Michael Matthews and Marcel Kittel.

But by the time the race reached the first categorized climb, Serge Pauwels (Team Dimension Data) and Warren Barguil (Sunweb) had attacked, gaining a minute on a group of 47 riders and three-and-a-half minutes on the peloton, led by Team Sky.

Team Sky duo Luke Rowe and Vasili Kiryienka couldn’t handle the pace that was being set, and Christian Knees dropped back and helped reel in the stage leaders by a minute.

The attacks kept coming at the front, while Démare struggled to stay within the time allowed to remain in the race.

Froome and Thomas missed a corner, and Thomas went over a bale of hay but quickly recovered. That saw the gap stretched out to three minutes, but Team Sky upped the pace again, and when Michal Kwiatkowski hit the front, the gap was halved ahead of the final 30 kilometers.

The leading group grew to nine, but with the pace still high, it fell back to four, with Nicolas Roche (BMC), Robert Gesink (LottoNL-Jumbo) and Calmejane joining Pauwels at the front.

Calmejane went solo with 18 km to go, and despite almost coming to a standstill with a cramp, he held on to win the stage ahead of Gesink and Guillaume Martin (Wanty).