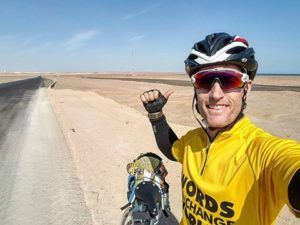 Ras Gharib to Hurghada. I’m absolutely smashed, fell apart completely with 40km to go and Hurghada just never seemed to arrive!! Left at 7am from my Amir Palace hotel (not even close to a palace), bought some supplies for the road and headed south with the now ubiquitous tail wind. Today’s scenery didn’t change for 160km, desert and more desert, punctuated by wind farms and police compound oases, even the red sea disappeared for long stretches. But that was fine because I felt good and I was cruising. My rapidly depleting energy levels also coincided with the midday heat and that beautiful heavenly loving friendly tail wind became that terrible and swung round to be in front of me. Then I just hung on and eventually after what seemed like days, Hurghada arrived.

? I went looking for my hotel which turned out to have closed down! Thankfully Hurghada is quite the bustling tourist town and a big dive spot so there were plenty of other choices. I almost hugged the manager when he said “yes we have room”. So…first half of ride, amazing, second half of ride, tears and Hurghada mirages. Still beats a day in the office though

? But I’m sore and off to find a beer and food.