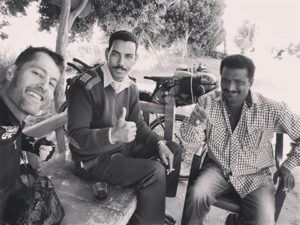 Edfu to Aswan. Yoh, really struggled today. Had the energy, but really sore leg muscles and a headwind for 116 km

. Whenever I could see the Nile, I found some strength, when the road headed away from the river I got bleak. The Nile really is a stunning river. I left Horus Hotel in Edfu, the noisiest hotel in all the world early this morning and promptly had to dodge about 20 horse and carriages riding towards me full of Chinese tourists. Cue lots of photos of me from them. I managed to escape the tourist police for the first 50 km, but then they caught up. Mahmoud and Hassin are in the pic and turned out to be very friendly

. As frustrating and annoying as the guys have been when they sit 5 m behind you all day, they’ve all been friendly and chatty and fascinated by the bike. But it is inhibiting and you end up not stopping as often as you’d like and feeling under pressure to get to your destination. I did also meet my first over landing tourists, Heinz and his wife passed me and then stopped in the motor home that they had shipped over from Italy. They are taking a year to drive down to Cape Town

?. Aswan was looking good when I arrived, but then my hotel was not where Google Maps said it was, so rode around in circles until I found it! Tired

? Rest day tomorrow and hoping my legs feel better as I have a monster day coming up on Sunday!

A few hours after arriving in Aswan pretty broken, I was having a few beers on the terrace of the Old Cataract Hotel watching feluccas sail by as the sun set over the Nile. I felt better

? If you’re in Aswan go straight to the Old Cataract terrace (it’s basically the Mount Nelson of Egypt) for sun-downers, the hotel still looks like it did in the 1920’s and is where Agatha Christie wrote part of her book, Death on the Nile. Kiff.