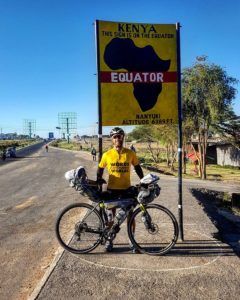 Cheesy Equator pic! ✔ Cheesy, but I have wanted this pic ever since I was at varsity and saw it many years ago in an old Getaway magazine ☺. It seemed a pretty exotic thing to go to and I had always wondered if, when and how I might one day get to the equator. As it turned out, I got there 3 days ago, on a BH bike and in lycra…? Inevitability it was a total anti-climax, it was not even 2 km into my ride and I almost passed the sign without seeing it, I’m not sure what I expected, maybe queues of people lining up to have their pic taken…but really it was just me and a couple of skittish goats ??. The rest of the days ride was excellent, mostly because it was downhill and I ended up at a beaut of a resort campsite on the river along with 2 excellent guys who were up from Nairobi for a couple of nights. Some good banter and even got to shoot some pool ?. 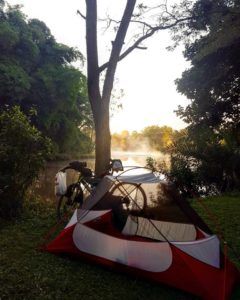 (It’s no Sudan desert, but it’ll do! ? Sunrise on the river with some rapids in the background…)

The next day was 100 km and 1200 m of climbing to Nairobi. I totally cracked the shits with the traffic on the way as they all seem to have a death wish and wanted to take me down with them. With about 40 km to go, I ended up on a 3 lane highway into the CBD (picture the N1 from Durbanville to CT), decided enough was enough and wasn’t going to hide anymore, it felt even more dangerous, so, fueled by 2 Red Bulls, I put my music in, decided to dominate the slow lane and with a big tail wind behind me raced the trucks and buses up and down the rollers into town. Fast, furious, exhilarating and terrifying! ??⛟ Made it safely in the end and really awesome to be staying with a good friend who now lives in Nairobi ?. It’s the traditional halfway point and as it happens, today marks exactly 2 months until my planned arrival in Cape Town! On wards and downwards to the Tanzanian border on Sunday ?.