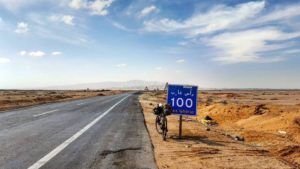 I made day 1! So flipping relieved. Hardly slept (also Cairo is noisy and Ahmed like to leave all the windows open, fyi all that hooting is 24/7…). When I got up I decided I was too anxious and nervous for my first day to face messing around for 2hrs trying to get out of Cairo directly, getting lost and dodging traffic and trucks. So I got a taxi to the outskirts of Cairo and started from there. So my 204 km day became a 156 km day which I only realized a couple of hours later and gave myself a big high five. So glad I did, by 6am traffic was mental and my legs gave out with about 20 km to go, so definitely would have not made 204 km. Well I would have but it would have been dark! Was pretty broken and wondering how I will go today. Relatively uneventful day in the end except for a big scare of riding straight over a huge jagged rock in the first 10 km! But bike and tyres seem to be ok. Lots of trucks and hooting. Everyone I’ve met so far in Egypt has been super friendly and generous. Booked into a swanky red sea resort now. I’m not sure I want to leave.