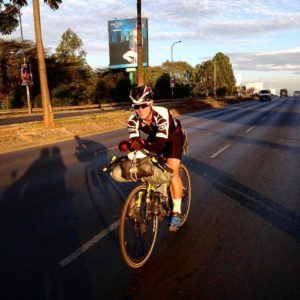 It’s taken me 4 countries to actually get a shot of me riding my bike ?! I Was kinda reluctant to leave Nairobi today. For starters it was a 170 km day to the border, it promised to be a long one. I had an awesome time hanging out in Nairobi with Layla Liebetrau looking after me and making sure I was rested and fed ?. Nairobi was a good mental reset and Kenya has been fantastic overall, I haven’t even been to any of its really cool spots. I will definitely be back. I’ve slowly re-discovered my enthusiasm levels and energy levels over the past 2 weeks after Ethiopia. Layla gave me a Boda Boda escort out the city this morning to put me on the right road and then the rest of the day went much quicker than I thought which was great. Early Sunday morning meant light traffic and quieter roads than my arrival into Nairobi and once I had taken the junction to Namanga and onto my usual S compass heading, the traffic disappeared and I had a beautiful smooth road mostly to myself to the border. The wind was mild and generally just behind me and the road wound its way through gentle undulating hills, overall it ultimately ended up being a downhill ride to the border. Apart of course, from the last 20 km when it mostly climbed and the wind swung round to into me. Amazing. I tired quickly but was close enough to Namanga to suck it up and push through to the end. About 10 km from Namanga I had my first sighting of Mt. Kilimanjaro as well ??Tomorrow morning l’ll cross the border into Tanzania and then it’s a hilly 115 km ride to Arusha, with a big climb in the middle somewhere apparently…?