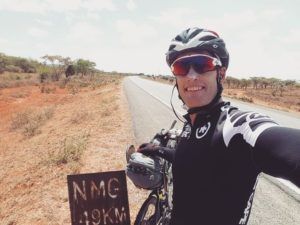 NMG (Namanga, Tanzania border) 49 km to go! I cycle (unfortunately, irregularly the past couple of years) with a talented crew in Cape Town known as the LPC, the route is La Perla opp Sea Point Pool to Chapman’s Peak and back. It’s a weekly morning ride that I absolutely love and scares the crap out of me, every.single.time. It starts at 5.45 am and the only rules are; it leaves on time, no exceptions and no one waits for you at the top of climbs. Keep up or stay dropped. I have to be right at the top of my game (no, past the top) to make it back home with the bunch and I’m always silently whooping inside. I’m usually at the back and I’m usually praying someone is coming back from injury (usually it’s Higgsie 😉 and I’ll have some company when inevitably someone ramps up the pace on the Llandudno climb, even though it’s supposed to be a ‘chilled’ LPC. The route distance is 49 km from Sea Point Pool and back and will take me just under 1hr30 on a good day. Now whenever I go past a marker that says 49 km to go, I think, “Awesome, just an LPC to go and I’m there!” Then I think of the number of times I was put in the hurt locker on the LPC and I smile and cry a little at the same time. Also, 49 km these days doesn’t take me an hour and a half! I keep forgetting to factor that in. The LPC makes an appearance in this year’s Cape Cycle Tour magazine, check it out ?? 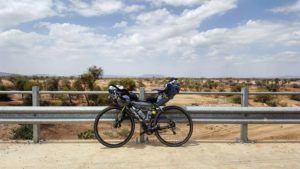