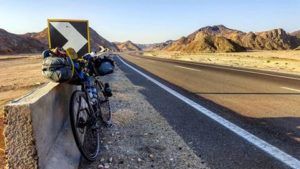 Qena to Luxor. Cycling like an Egyptian. Qena is not a town you want to hang out in

? That, combined with the fact that I wanted to lose my police escort if I could, meant I was out the door at 6am. I had told the tourist police I was leaving at 7…I crossed the train lines (right outside my window, trains and sirens all night

?) turned right and was straight onto the road to Luxor. It was 62km to Luxor and I also wanted to leave early so that I could get most of today and tomorrow to look around. A mere 2km later I went through my first police checkpoint, but think it was too early and no one seemed to notice! Selfie high 5. 10km later I heard the familiar diesel engine…”Name? You get in now?” Sigh. I must have gone through about 10 checkpoints today, luckily I didn’t have to stop though. Being close to the Nile there was a lot more life, a lot more greenery and a lot more traffic. There was also that persistent headwind!

? But the reward was arriving early in the day at Luxor which I made by 10.30am. I am still feeling pretty tired though, so hopefully another rest day will sort that out. Luxor is a beautiful city, divided by the Nile and entered through a wide landscaped boulevard. It’s essentially a big open air museum. My hotel is on the West bank, which is known as, er, The Side of the Dead, as it is where most of the tombs and burial sites are found. I had arrived on the East bank, so took a ferry across the river and a few small dusty back streets later I had booked into the Hotel Cleopatra. Has a great rooftop area and view

? I did have to lug my bike up 4 flights though

? Had a nap and spent the afternoon wandering around the temple of Karnak, also went a bit Japanese photo crazy today

? Tomorrow will check out Valley of the Kings