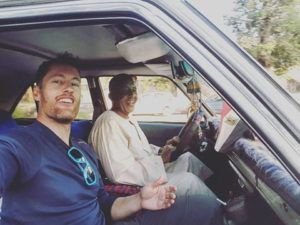 ? Mohamed is going to help escort me down the military road that runs down past the Aswan Dam and down Lake Nasser. When I was researching this trip, Mark Beaumont had just released his book, Africa Solo, his account of his solo and unsupported world record ride from Cairo to Cape Town. A staggering 42 days!! Anyway, he mentioned in the book that the military road from Aswan to Abu Simbel had recently been reopened, although you had to organize and pay for a police escort. The first TDA team took this route in 2003. Shortly thereafter there was a border dispute with Sudan and the road was closed to everyone. The only other way to get down to Abu Simbel and Sudan is to take a 24 hr ferry which by all accounts is always overcrowded, cramped and with someone likely to sit on your bike. Mark Beaumont took the opportunity to cycle the road officially for the first time since 2003 and thus set the record for the full and original Cairo to Cape Town route. The catch…is that the road is 280 km long and you can’t stop or stay over! But I loved the idea of being only one of a handful of people in the last 13 years to cycle on the road and I had always been curious as to how far I could cycle in one day. So, feeling totally overconfident, I contacted Mark, got Mohamed’s number and signed up. Unfortunately now that the day has arrived, I am not feeling great at all and debating whether to start at all tomorrow. So much bleakness

? Because everything has been arranged and is all set, I think I will start and then see how I feel. I’m conscious of picking my battles at the moment and that I’ve got many more days to go big should I choose to. Still beats the ferry I guess. So tomorrow onto Abu Simbel and then Monday it’s into Sudan and the desert!