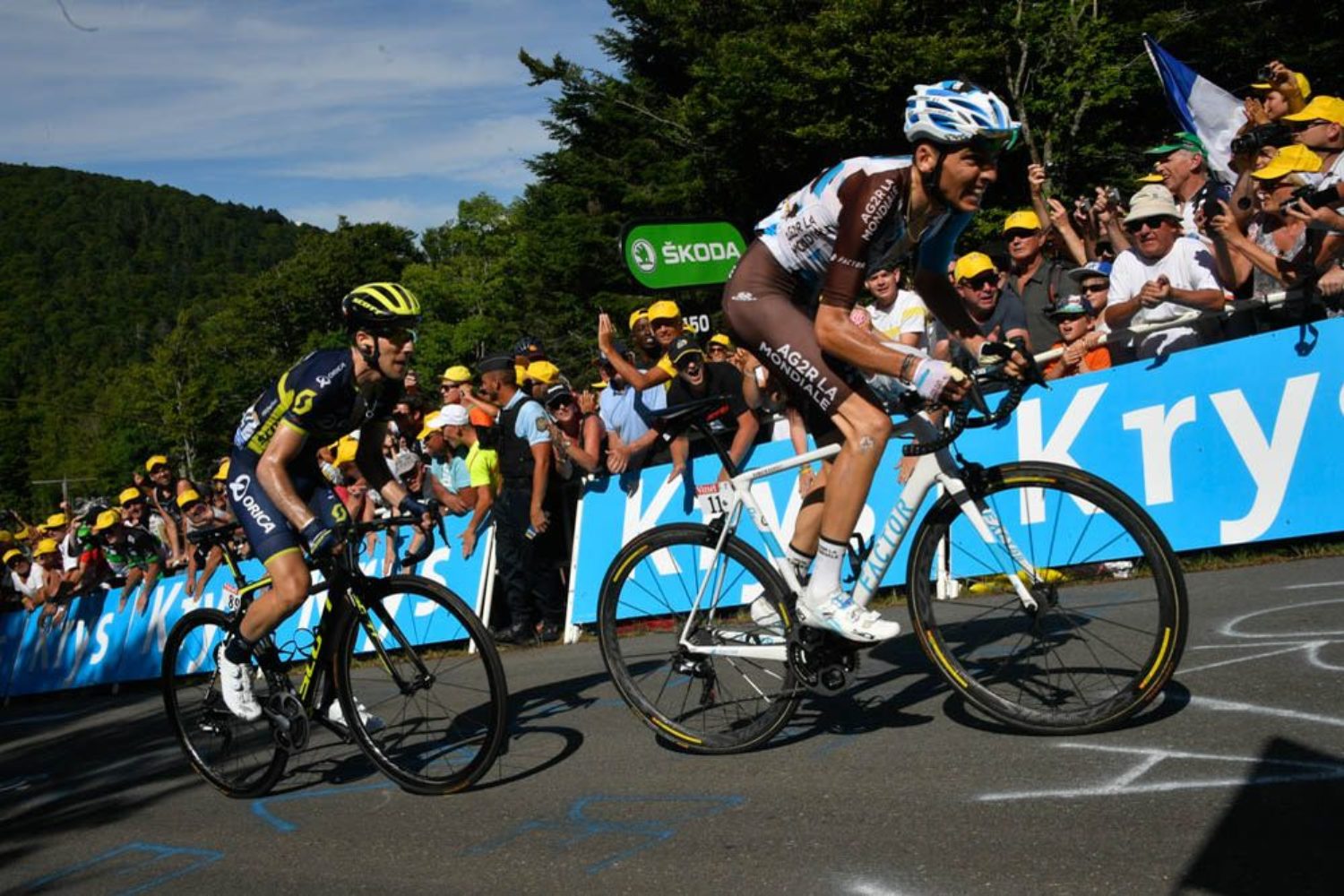 As the Tour de France woke up for its fifth stage, the upcoming first bout of direct hostilities between the overall favorites in the forefront of all the minds, with the shock waves of Peter Sagan’s disqualification the previous evening still rippling through the village départ in Vittel.

The peloton rolled out of Vittel towards the first of three summit finishes on this year’s Tour de France.

Unlike Tuesday, when Guillaume Van Keirsbulck was the only rider to stick his hand up for the breakaway, this time there was plenty of interest, though the decisive move still went quickly. Thomas Voeckler (Direct Energie) sparked it, and soon there were seven riders with him.

The breakaway started to open up an advantage but BMC soon came to the front, and it was quickly apparent that their chances of disputing the stage win were slim. Bakelants started the day just 16 seconds off Geraint Thomas’ overall lead but Sky showed no interest in chasing and left it up to BMC, who were clearly keen to work for a stage win for Porte.

The breakaway never managed to extend their lead beyond 3:30 and by the Côte d’Esmoulières, the only other climb (Cat. 3) on the route besides La Planche des Belles Filles, it had fallen below the two-minute mark. Moments before, Boasson Hagen had mopped up maximum points at the intermediate sprint, ahead of Gilbert and De Gendt, while Michael Matthews made use of a full Sunweb lead-out to mop up the most of what was left for the peloton.

On the climb, Bakelants went on the attack over the top while Delage and De Gendt were dropped for good. Bakelants waited for his companions and the six of them stretched their lead back up to 2:30 thanks to a lull in the bunch on the climb.

BMC continued their charge, and with 12km to go Gilbert decided to roll the dice, dropping all but Bakelants. The Belgian duo took a lead of around a minute into the start of the Planche des Belles Filles ascent, by which point Sky had said ‘thank you very much’ to BMC and had taken over on the approach to the climb. Kwiatkowski took up the reins as the gradients hit the double digits in the early section, while Sergio Henao, Mikel Landa, Mikel Nieve, Chris Froome, and Geraint Thomas were tucked in behind.

As Lilian Calmejane (Direct Energie) launched a hopeful attack, the two leaders were caught with around 4km to go, and still, Kwiatkowski continued, setting such a pace that even Landa, who hadn’t done a turn, couldn’t keep up with. The Pole pulled over with 3.3km to go, handing it over to Mikel Nieve. At this point, Contador’s teammate Bauke Mollema was dropped, as was Sky’s Henao.

The first real GC attack came from Aru with 2.3km to go, the Italian quickly opening a gap as he sprang out of the saddle. Sky, in contrasting style, set about grinding down the gap but failed to make inroads, and it was down to Froome to attack with 1.7km to go, even if it meant dropping the yellow jersey Thomas.

After Simon Yates put in a grinding big-gear acceleration, in stark contrast to Aru’s explosiveness; Froome accelerated away and dragged Porte with him, along with Dan Martin and Romain Bardet (Ag2R La Mondiale). Thomas was immediately in trouble, while it was more surprising to see Quintana and Contador (Trek segafredo) losing ground.

Froome pulled over with 1.2km to go, playing a game to force others to take it up, and Dan Martin duly obliged. Contador had nearly dragged the dropped riders back when Porte accelerated in the final few hundred metres, but by then it was clear Aru was going to celebrate the victory.

Martin attacked to spring clear on the steep final ramp, while Froome rode in close behind to resume his trend of taking the maillot jaune on the first summit finish.