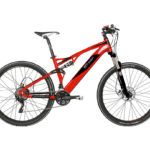 A few months ago Marc Erasmus, location manager for the Absa Cape Epic, asked me if he could use a full suspension e-bike to “ recce” the 2016 route. He had had an injury and felt the e-bike option could be a solution.

I felt it would be an ideal opportunity to showcase the EV785 (Dual Suss 29er) capabilities, and in general, the build quality of BH e-bikes we are so excited about. After a 44km test around Table Mountain we felt confident and this is what transpired..

“After having had surgery in April this year and not having been able to train, the thought of 7 days of continuous mountain biking was quite daunting and to be honest I could not have completed the tour without the use of the BH E-bike. Before trusting the robustness and reliability of the E-bike, the shop let me test ride the EV966 and put it through it paces prior to picking it up to ensure that I would have no issues. They even through in an additional back up battery for me to use – all in all really fantastic service from the entire team at BH bikes.

The bike is heavy at 23kg, there is no getting around that due to the battery which weighs in at 6kg’s as well as the motor at the back – not that it matters and no one is expecting a super light bike. That is not the selling point of this machine. Even so, for the average person watching the bike glide by, you wouldn’t notice that it was an E-bike. For all intents and purposes it looks and rides like a regular bike. The only difference is that you are assisted very ably on the climbs by the rear hub mounted motor. The control panel comes with a number of settings and the bike made it up most climbs very easily in eco or standard modes. There were a few racing snakes on the ride with me and we diced up a few of the climbs – I was undefeated although had to switch to “boost” mode to do so. You have to pedal and can engineer a workout for yourself but for the most part you get to ease up the climbs and a great pace and not have to worry about the gradient. The less the assistance, the longer the battery lasts. The amount of climbing and surface also play a part in battery life. On average I could get around 30km in on a single battery charge. The terrain I was riding was very steep and rough and you can expect around 45-50km of undulating riding on a single battery.

With the weight of the bike I was concerned about the single track and the descending on rough terrain. I shouldn’t have been worried as the bike handled whatever was thrown at it. Of course it is not as nimble and a light non motorized bike but I still enjoyed the single track and with the dual suspension the downhills were also no cause for concern.

One issue with a machine that has electrics and many additional moving parts is the potential to “break down” and be stranded with a heavy bike in the middle of the bush. Before heading out on any ride, make sure to check all the connections and cables are clear of other moving parts and you will have no issues – the parts are all very sturdy and the bike lasted very well. I did experience one electrical fault with some wiring but a quick call to the shop and a replacement part was dispatched almost immediately to where I was, replaced and I was again on my way and enjoying the experience. Again, excellent service especially considering I was at least 90 minutes away from Cape Town.

In summary: The bike worked fantastically well and served its purpose above my expectations. It doesn’t replace a true mountain bike experience but I don’t think it is trying to. If you are coming back from injury and still want to ride with your mates, if your partner is super fit but you want to join in the fun, or if you just don’t want to have to suffer up the hills but enjoy the single track – then this is the bike for you.

BH E-bikes are the real deal, and service and customer care are hard to beat too.