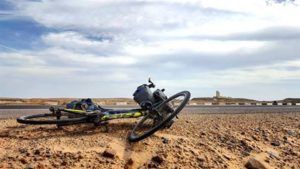 Hurghada to Safaga – 82km. Today was not great, I was grumpy, tired and my body was complaining massively. Basically I am paying for going from being in London, United Kingdom getting fat at my desk job straight to 130km, 6/7hr days on the bike. So I was expecting to start struggling after a few days as my body adjusted physically and mentally. But it still sucks! It was also supposed to be a short day at 62km – a reward for yesterday’s long one, but then I got so lost trying to get to out of Hurghada…I found my way in perfectly yesterday argh!! But Hurghada has a maze of one way systems going on for a small town and I ended up going round in circles, sigh. So combined with me moving slowly this morning and then wasting an hour and a half getting out of Hurghada, I wasn’t in the best of moods after eventually hitting the road south. It also meant I was going to finish around midday in the sun which I had wanted to avoid. My tail wind has disappeared and the flat roads I’ve had for 3 days became continous rollers today. Nothing hectic but enough to really annoy me!

? There was nothing too interesting to look at or report today either. Tomorrow I start to head back inland towards the Nile, I have a 170km day lined up to Qena, but I think I might take a rest day or break up tomorrow into 2 days. I will contemplate all this over a few beers

? Still feeling tired now, so will see how I feel in the morning.